Date: Saturday, April 11th, 2015 at Wheaton Religious Gift and Church Supply
Time: 3pm - 5pm
Join author John J. Thompson for a special conversation surrounding the release of his new book, Jesus, Bread, and Chocolate; Crafting a Handmade Faith in a Mass Market World (Zondervan / Harper Collins) at the site of his first real job, and the beginning of his now 29 year career in the music industry; Wheaton Religious Gifts. Thompson will share a short reading from the book, will spend some time discussing his history in downtown Wheaton as the founder of True Tunes, and will sign copies of his book. His son Jordan, an award winning barista, will be offering samples of coffee roasted at the Thompson home in Nashville, and there will be samples of craft made chocolate while supplies last. Don’t miss this special homecoming event that is designed to re-connect you with the hand-crafted nature of the Gospel.  Here's a link to our homepage for more information!  See you there! 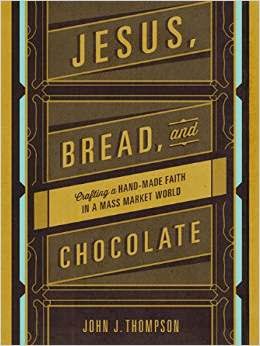 Posted by Church Supply Warehouse at 3:37 PM No comments:

The Vigil of All Hallow's Eve, or Halloween. All Saint's Day.

Solemnity celebrated on the first of November. It is instituted to honor all the saints, known and unknown, and, according to Urban IV, to supply any deficiencies in the faithful's celebration of saints' feasts during the year.

In the early days the Christians were accustomed to solemnize the anniversary of a martyr's death for Christ at the place of martyrdom. In the fourth century, neighboring dioceses began to interchange feasts, to transfer relics, to divide them, and to join in a common feast; as is shown by the invitation of St. Basil of Caesarea (397) to the bishops of the province of Pontus. Frequently groups of martyrs suffered on the same day, which naturally led to a joint commemoration. In the persecution of Diocletian the number of martyrs became so great that a separate day could not be assigned to each. But the Church, feeling that every martyr should be venerated, appointed a common day for all. The first trace of this we find in Antioch on the Sunday after Pentecost. We also find mention of a common day in a sermon of St. Ephrem the Syrian (373), and in the 74th homily of St. John Chrysostom (407). At first only martyrs and St. John the Baptist were honored by a special day. Other saints were added gradually, and increased in number when a regular process of canonization was established; still, as early as 411 there is in the Chaldean Calendar a "Commemoratio Confessorum" for the Friday after Easter. In the West Boniface IV, 13 May, 609, or 610, consecrated the Pantheon in Rome to the Blessed Virgin and all the martyrs, ordering an anniversary. Gregory III (731-741) consecrated a chapel in the Basilica of St. Peter to all the saints and fixed the anniversary for 1 November. A basilica of the Apostles already existed in Rome, and its dedication was annually remembered on 1 May. Gregory IV (827-844) extended the celebration on 1 November to the entire Church. The vigil seems to have been held as early as the feast itself. The octave was added by Sixtus IV (1471-84).

Prepare to commemorate the departed on November 1, by ordering Memorial candles from Church Supply Warehouse!   http://bit.ly/1dYngEw

We carry Vigil candles in different sizes plus glass bottle Memorial candles that can be enscripted with the name of your loved one!  Visit us online or call toll-free at 1-866-757-5195!


Posted by Church Supply Warehouse at 4:04 PM No comments:

The First Communion, a Brief Introduction

First Communion is traditionally an important religious ceremony for Roman Catholic families. Also, among those raised Catholic, Holy Communion is the third sacrament received from the seven sacraments. This is traditionally practiced by many Roman Catholic families, including Spanish, Italians, Latin Americans, Scottish, Irish and Polish.  Traditions surrounding First Communion usually include large family gatherings and parties to celebrate the event and special clothing is usually worn. The clothing is often white to symbolize purity. Girls often wear fancy dresses and a veil attached to a wreath of flowers or hair ornament. In other communities, girls commonly wear dresses passed down to them from sisters or mothers, or even simply their school uniforms plus the veil and/or wreath. In many Latin America countries, boys wear military-style dress uniforms with gold braid aiguilettes. In Switzerland and Luxembourg, both boys and girls wear plain white robes with brown wooden crosses around their necks. In Scotland, boys traditionally wear kilts and other traditional Scottish dress which accompany the kilt. Gifts of a religious nature are usually given, such as rosaries, prayer books, in addition to religious statues and icons. Gifts of cash are also common. Many families have formal professional photographs taken in addition to candid snapshots in order to commemorate the event. Some churches arrange for a professional photographer after the ceremony.

Preparation for First Communion falls to the Pastor of the particular congregation or parish.  The duty of preparing candidates for First Communion is the most important that can fall to the lot of a pastor (O'Kane, Rubrics of Rom. Rit., p. 391). This is amply recognized by the Church in every country, for almost every diocese has its statutes regulating with scrupulous exactness all the preliminaries of this sacred and solemn event (cf. Decr. of III Plen. Balt., no. 217, 218, etc.). A long course of religious instruction is usually prescribed while the moral training and virtuous formation of the mind is also urgently insisted upon. In regard to First Communion it may be observed that one, it should take place during pascal time. Two, that it should be received as a rule in the parochial church, unless the consent of the pastor is had for receiving it elsewhere.  Three, that no effort should be spared to fix the occasion indelibly on the mind of the young communicant; and four, that for this purpose the Mass at which it is received should be celebrated with special solemnity, boys and girls being suitably attired and assigned to separate sections of the church.

Honor the special child in your life by giving them a gift that lasts a lifetime.  Church Supply Warehouse offers a large variety of First Communion and Confirmation gifts!  Visit us online to view our selection!